Home - Music News - The catchiest football songs according to science 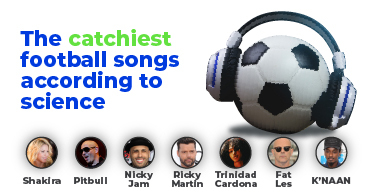 Football, soccer, the beautiful game — whatever you call it, football is one of the most popular sports on the planet. Whether your team is in the Premier League or the Isthmian League, there is little better than the rush of a win.

Given its popularity, it should be no surprise that the love of football spreads into other hobbies and pastimes. Film and TV have had their fair share of soccer, but it’s in the music industry that a love of football really shines.

SeatPick wanted to find which, of the many football-inspired pop songs, was the catchiest. To do this, they looked at factors like popularity and number of Youtube views, how good the song is to dance to, and how happy it was. Then by ranking the average score, they created their official football song ranking.

How we found the catchiest football songs

SeatPick used four main metrics to create this ranking, as well as how well the songs have done on Youtube and Spotify. These metrics are:

The catchiest football songs in the world

Starting us off with a bang is Shakira’s Waka Waka. This uptempo anthem was released in 2010 as the official song of the FIFA world cup that year. It has since remained one of the South American siren’s most popular songs, and science shows us why.

In terms of overall popularity, it blows all the other songs out of the water. It has over three billion views on YouTube alone. It also scores high in certain criteria, like danceability (7.6/10), energy (8.7/10), and valence (7.4/10). Its speechiness score (8.42/10) is helping its popularity — there are fewer words to learn so anyone can sing along! All of this results in Waka Waka winning winning first place with 8.35/10.

The Qatar World Cup may have a fair few controversies attached to it, but Hayya Hayya by Trinidad Cardona isn’t one of them. Released in 2022, it is the first single of FIFA’s World Cup soundtrack for that year.

Ricky Martin’s 1998 hit has proved to be a football classic and was a huge success on release. The FIFA world cup song has even been credited as being the cause of the “Latin Explosion” in pop music.

Next up is Pitbull’s We Are One, Ole O-landing in fourth place. This was FIFA’s official song in 2014 and has retained a decent amount of popularity since then. The song also features Jennifer Lopez and Claudia Leitte.

Somali-Canadian artist K’NAAN first released this song in 2008, and it was a huge hit. It was covered as a charity single by an ad-hoc group called Young Artists for Haiti following the 2010 disaster.

2020 was a weird time for everything, and this was especially true in football. Due to Covid restrictions, the UEFA Euro 2020 was actually held in 2021. Martin Garrix’s song We Are The People was released in May of that year, as the official UEFA Euro 2020 song.

The song was met positively, garnering a respectable 31 million views on YouTube in the space of a year. It scores a healthy 62/100 for popularity on Spotify and continues to score well through the rankings. While it scores 2.11/10 for speechiness and 3/10 for valence, it receives 6.6/10 for danceability and 7.33/10 for energy. This gives We Are The People 6.15/10.

In 10th position on the rankings is Nelly Furtado with Força. It was the official song for the European Football Championship, which in 2004 was held in Portugal. (“Força” is Portuguese slang for “keep going”).

The 1990 FIFA World Cup song, World in Motion, was a number 1 hit in the UK. Despite this, it might be one of the lesser-known songs on our list. With a (relatively) paltry 9.7 million views on YouTube, it still scores a decent 29/100 for popularity on Spotify.

Nicky Jam’s “Live It Up” received mixed reviews when it was released in 2018, with fans baffled at the choice of genre. But despite this, the official FIFA world cup song has landed in the top ten. This is due to its popularity on Spotify (63), YouTube views (40 million), along with some high scores. It received 5.8/10 for danceability, 8/10 for valence, and a huge 9.4/10 for energy. This classic underdog story gets a final score of 5.5/10.

When you think of football songs, Vindaloo has to be one of the first that springs to mind. Originally written as a parody of football chants, upon release it was almost immediately adopted as one in its own right.

The high-energy offering from Carlos Santana was the 2014 FIFA World Cup official anthem. It could be seen as underrated, with just 4.8 million views on YouTube. It has 42/100 for popularity on Spotify. The speechiness score is impressive with 9.47, along with energy at 9.56/10. The remaining scores are a bit disappointing though, with 5.5/10 for danceability and 4.12/10 for valence.

The official song of UEFA Euro 2000, this frenetic dance hit is still heard at football games across Europe.

A distinctive entry on this list, Together Stronger was the official anthem of the Wales national team for UEFA Euro 2016. It charted at number one for physical sales.

While the hymn Jerusalem has been around for a tad longer, in the year 2000 band Fat Les recorded a version of it as the official anthem for England at the Euro 2000 tournament.

Five of the best football songs for dancing

Football fans are world-renowned for their love of music and a party — especially when their team of choice has been victorious. Danceability is an important ranking factor for all the songs featured on this list. By focusing solely on a song’s danceability, we’ve created the ultimate playlist for the next time your team wins or loses, and you feel the urge to cut some shapes.

Whether you’re Waka Waka walking to work, or carrying a bucket of curry to the train station, there’s an anthem to get you in the football spirit. Football is the great uniter, it can bring families closer and make friends of enemies. There’s nothing quite like jump-hugging a stranger when your team scores the winning goal, and now you know what to listen to when you celebrate.

Use these songs to get in the mood after buying Premier League tickets or other types of football tickets on SeatPick.